Inactive student accounts will be deleted after 18 months

Teachers should note that student records that they set-up, and are never used, will be deleted after 18 months.  This is necessary to ensure system resources are being allocated to accounts that are actually being used.  Note that we do not delete any records with activity (although these should also be deleted by teachers after the student has moved on).

And remember that new student accounts can easily be set up from the teacher dashboard.

If you or your students are currently studying/testing on the islands in Oceania, you may want to be aware of two changes to be launched on Monday September 21, affecting the Oceania quizzes:

First, the map will be changing. This is the current version, where Pictairn Islands is a location off the map, indicated by an arrow:

In the new version, the map extends further east so that both Pitcairn Islands, and Easter Island are shown:

In the basic version of the quiz that asks only about the 14 countries, the questions will not be changing, nor will where you click to answer. You will just see a slightly different map.

The second change, which you may have guessed already, is that Easter Island, which is a special territory of Chile,  will be an available option to add to a customized quiz.  But if you take a customized quiz that asks about some of the other islands, you may have to familiarize yourself with a different click spot to answer Where are the Pitcairn Islands?

And if you customize a quiz, you’ll be able to add Easter Island to the questions. If you’re taking quizzes created by someone else, you might see Easter Island asked about in the near future.

To summarize, you will see the following changes:

Oceania Islands, a non-customizable quiz, will have the new map and a new Easter Island question. https://lizardpoint.com/geography/oceania-islands-quiz.php

New Explore button! Preview of a new feature - give it a try and let us know what you think

We've been working on a new feature (actually, it's more like two features, but they're related) that will help you study and learn, and we're ready to show it to you on a couple of quizzes:

For now, it's only available on the above two quizzes, and we'd love your feedback (at hello@lizardpoint.com). We're especially interested in any technical problems that might be related to devices/browsers we haven't tested.

The biggest change is the new Explore button which you'll find on the end of the row of buttons on the quiz:

When you click on the Explore button, you'll get an area (the Explore Box) to the right of the map that lists all the places the quiz asks about. Mouse over (or tap on) the map areas to see the name of the place.

In the screenshot below, I have clicked on the map on Austria. A text tip (or label) appears just above where I clicked that shows me the name of the location I clicked on, and as well, the name appears in the green bordered box on the right, just below the title, "Explore the locations". I've circled both of these in red to point them out here.

You can also click on any of the place names in the list in the Explore Box, and you will see them appear on the map the same way: highlighted, and a text tip.

Benefit: for students that are overwhelmed by all the place names on the Labeled Map, the Explore button gives them another way to learn or review the locations just on this quiz.

And the second (related) feature is....

You'll also see Text Tips when you use the Show Me button, as shown in the following screenshot of a UK cities quiz. Sometimes, it can be hard to notice what area was highlighted when you click the Show Me button... now it's more obvious. The label (text tip) will be just above the uppermost part of the highlighted area - a bit to the left or to the right depending on how far the highlighted area is from the edge of the image.

Benefit: it's easier to spot the area highlighted when using the Show Me button.

Please try the new feature on these two quizzes, and send any feedback to hello@lizardpoint.com.  We'd like to launch this feature by the end of February, and we want to make sure there aren't any issues we aren't aware of.

The stamp program awards stamps (doh!) to signed in users for the completion of quizzes in certain categories (such as Africa, Europe, Bodies of Water, Cities and more). Now you can earn stamps for Trivia quizzes as well.

Your "My Stamps" page shows you all the stamps you have earned, and it looks something like this:

When you earn a new stamp, you'll get a notification when you complete a quiz, like this: 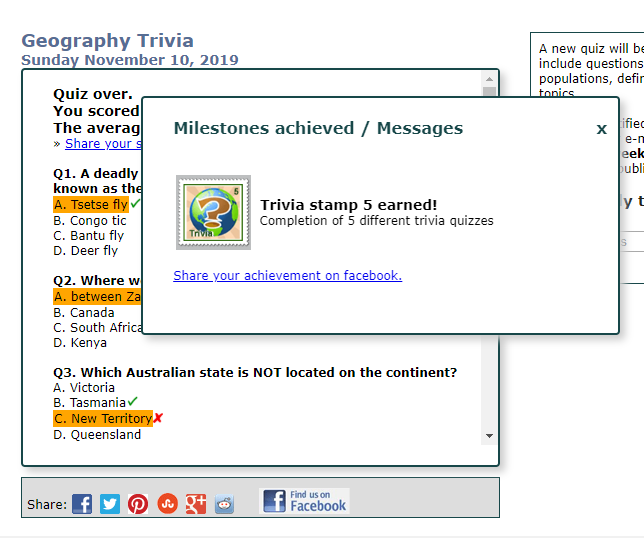 If you've been signing in when you do the trivia quizzes, we've given you credit for all your completions. So you don't have to start from scratch! If you want to see your stamps now, sign in, and look in your My Account menu for the My Stamps link.

Another great benefit of your free account is that we save your quiz results for all your quizzes, so you can always review your progress.

You can read more about the Personalized Quiz Tracker and stamp program. And you can create your free account here.